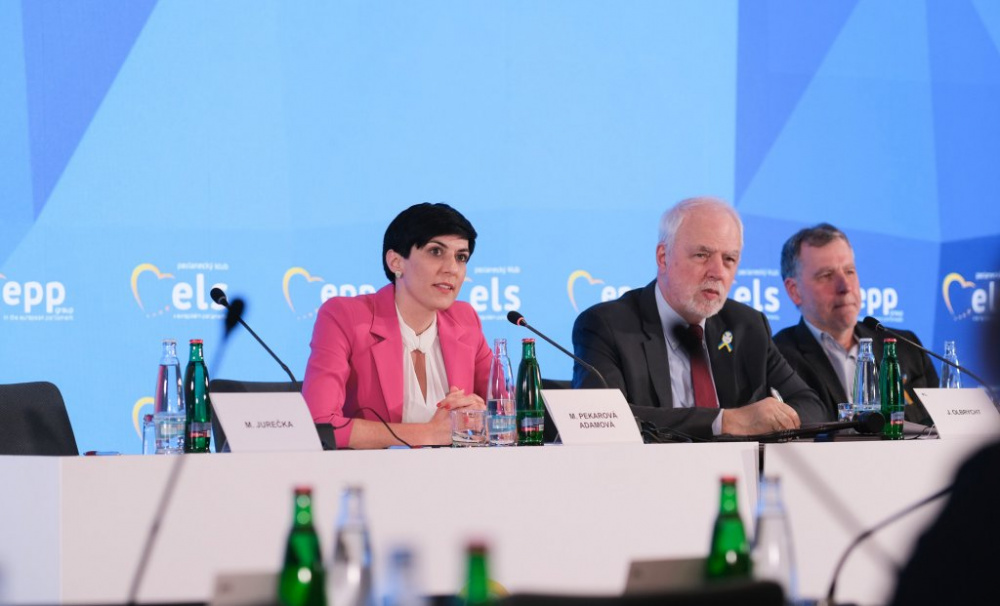 It is my great pleasure and honor to welcome you here in Prague at the EPP bureau meeting. I am really glad that the Covid situation improved, and we can meet in person. That is definitely good news.

Unfortunately, the list of good news is very short these days.

We live in the most eventful and challenging times in the last several decades. Such times are always a test of cooperation, which is the only way to overcome the related challenges.

When the WHO officially declared the Covid-19 pandemic more than 2 years ago, nobody expected the chain of events that would follow. The pandemic and the related measures put unprecedented strain on our societies and economies. When we finally started seeing a glimmer of light at the end of the tunnel, and wanted to focus on the post-pandemic recovery, things got even worse. The brutal Russian aggression against Ukraine started the biggest interstate conflict in Europe since the Second World War.

This Putin´s war will be the real test of the European priorities and values. We will only succeed in this test if we rightly define what is important – what really matters. You often hear that economic prosperity should be our main goal. That seemingly makes sense. But we must ask ourselves whether we can achieve economic prosperity if there is no security, freedom and democracy. And the honest answer is “no”. Not only would it be practically impossible, it would also be morally wrong! Once we compromise on our core values of freedom and democracy, Putin and other dictators have already won.

The European People´s Party is the strongest faction in the European Parliament and across the whole continent. Therefore, we have the unique opportunity, but also the obligation, to help Ukraine to win the war against the Russian aggressors. The Ukrainian soldiers in the trenches around Kharkiv or Mikolaiv are not defending only their country, families and homes. They are defending the very values the European continent rests upon. As a pan-European political party that has been built around these values, the EPP must do its best to prevent that the war ends by Russian victory, or as a frozen conflict. The only acceptable outcome is a victory of Ukraine and a defeat of Putin and his dictatorial regime. I can assure you that the Czech Republic is ready and will support Ukraine by all possible means to achieve the above-mentioned goals. It is not only due to our own painful history with the Russian aggression, but also due to the adherence to the values that we cherish and that are deeply rooted in our society.

The fact that the war in Ukraine is the most urgent challenge we are dealing with, does not mean that all other problems have magically disappeared. This is by no means the case. The climate change continues to pose a major threat and must be tackled with utmost urgency! The Russian aggression is actually one more reason to speed up the phasing out of the fossil fuels. The same path that leads to carbon neutrality will also lead out of the dependence on Russian energy. In this context, let me mention the recent resolution by the European Parliament, which calls for further reduction of the EU’s energy reliance on Russia.

This is obviously easier said than done – it is going be extremely difficult for many member states, including the Czech Republic, which still rely heavily on Russian gas.

In order to succeed in our joint effort to achieve decarbonization and energy independence of Europe, there will have to be real coordination and solidarity among the member states. Just today, the Russians stopped supplying gas to Poland and Bulgaria. Not only it is a breach of existing contracts, it is also an attempt to create divisions among the Europeans. But the Russians will not succeed, because we will not allow them. On the contrary, we have to step up our cooperation in the field of energy. The LNG terminals – the existing ones as well as those newly built – must also serve countries with no direct access to the sea; we also have to share the storage capacities and build the cross border pipelines wherever necessary.

I understand that solidarity cannot be taken for granted and I realize that many Western European countries can now use the argument that the V4 and other Central European countries did not show greater solidarity during the 2015 refugee crisis.  However, things have changed in the Czech Republic after the October election. The new Czech government will not hesitate to show solidarity to those in need and will contribute to finding common European solutions to the urgent problems. By the way, it was my own party, the TOP09, which called for solidarity in the context of the 2015 refugee crisis, even if it was not exactly a popular position in the internal Czech debate.

I briefly have to mention the upcoming Czech Presidency of the Council of the EU. It will be a great challenge and great opportunity and the whole coalition takes it very seriously. The focus will obviously be the support and assistance to Ukraine – being humanitarian, military, financial or political. We will also focus on the security of the EU member states and the resilience of our institutions and societies. Cyber-attacks, disinformation campaigns and other hybrid threats risk undermining the stability of our democracies and have to be tackled at the European level. I will personally focus on the Eastern Partnership I plan to host two events focusing on the youth and the civil society in the Eastern Partnership countries.

To conclude, I would like to reiterate the urgency of more intense cooperation within the EPP family. Our model of the competitive and sustainable social market economy based on the values of freedom, democracy and human rights is the best way to build strong, prosperous and inspiring community of European nations. I firmly believe that the tremendous risks and challenges we are currently facing, will actually makes us stronger than ever before. The EPP must be the true leading force behind this effort.

Dear colleagues, thank you for your attention. I wish all a successful meeting.